Information is Money: Facebook and Google are the biggest custodians of personal information. Consumers sacrificed privacy for the convenience of these services; whether they knew it or not, their identities, browsing habits, searches and online shopping information are monetized. Web 3.0 would take a nostalgic turn to the vision of being more ‘human’ and more privacy. Rather than concentrating the power and user data in the hands of huge behemoths with questionable motives, it would be returned to the rightful owners. Decentralization was the idea; blockchain was the means. Now we have what is described as human-centered Internet.

No central point of control: Middlemen are removed from the equation, blockchains like Ethereum provide a trustless platform where the rules are unbreakable and data is fully encrypted. Facebook and Google will no longer have control of user data. No government or entity will have the ability to kill sites and services; and no single individual can control the identities of others.

Ownership of data: End users will regain complete control of data and have the security of encryption. Information can then be shared on a case-by-case and permissioned basis. At present, big companies like Facebook has factories of servers storing information on dietary preferences, income, interests, credit card details and more. It’s not merely to improve their services — marketers and advertisers pay billions each year for the data.

Dramatic reduction in hacks and data breaches: Because data will be decentralized and distributed, hackers would need to turn off the entire network, while state-sponsored tools such as Vault7, used by the three-letter agencies, would be rendered obsolete. At present, internet companies are compelled to hand over user data or succumb to having the entire database scrutinized.

Permissionless blockchains: Anyone can create an address and interact with the network. The power to access permissionless chains cannot be overstated. Users will not be barred on account of geography, income, gender, orientation or a host of other sociological and demographic factors. Wealth and other digital assets can be transferred cross-border, quickly and efficiently, anywhere in the world.

Ethereum is a world computer that you can't shut down: Ethereum is an open blockchain platform that lets anyone build and use decentralized applications. No one control or owns Ethereum – It is a true open-source project built in collaboration by many people around the world. Unlike the Bitcoin protocol. Ethereum was designed to be adaptable and flexible to allow for new things to be built on top.

What is Enterprise Ethereum?

Ohanae is extending the power of blockchain to every business process, every app, and every human being.

Ohana Blockchain Architecture Stack defines the building blocks needed to drive the Web 3.0 era of decentralized, connective intelligence—the next generation of enterprise Ethereum applications that, like the Internet, will work anywhere and is capable of facilitating smart contracts without intermediaries. 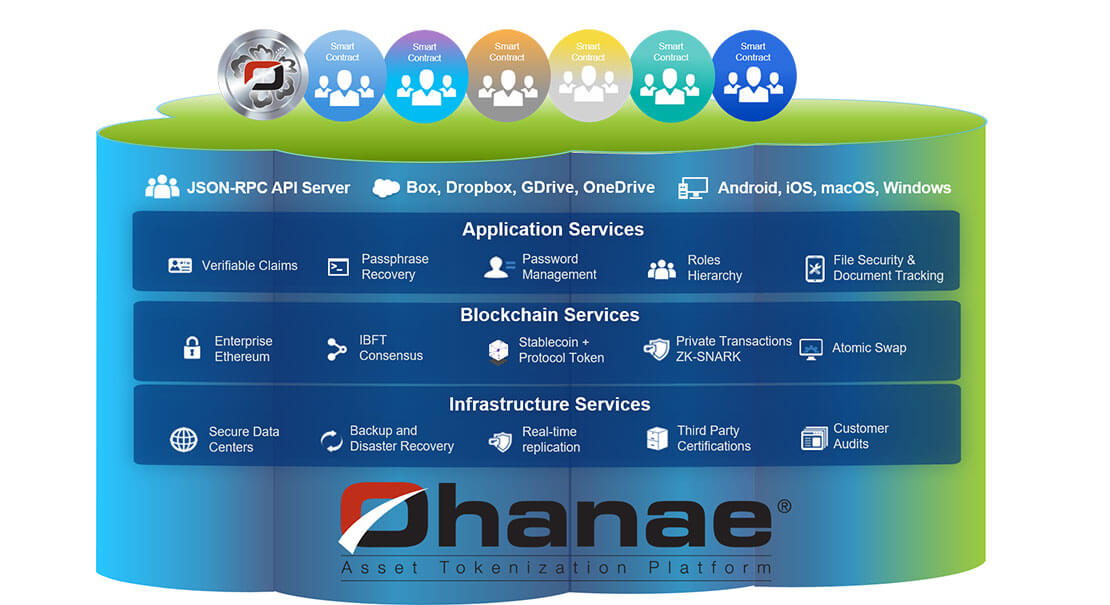 The Ohanae Platform has built-in:

Going beyond simple identity and data protection: Passwords are not going away any time soon. Currently, users maintain their online identity with a simple username and password, and enterprises maintain a directory as their primary identity. Ohanae addresses this issue with complex password creation and usage, because without strong passwords, there is no protection. Ohanae ensures passwords are not stored in the cloud or your device; they are generated only at the time of use for armor-shield protection.

With the move toward the interoperability of decentralized identifiers and verifiable claims, identity owners have persistent, independent digital identities and can choose exactly when, how, and to whom they can disclose any private data. This move then calls for the need for information governance to reduce organizational risk in fields requiring compliance.

Atomic Swap: Allows tokens to be moved from one network to another WITHOUT increasing the total supply of the token. There are a many standalone blockchains that exist today but they cannot interact with one another. Atomic Swap allows two-way transfer of ERC-20-to-ERC-20 tokens to move back and forth between the Ethereum mainnet and Ohana Blockchain network.

The fractional ownership that we observe to transform the housing market is part of a larger movement worldwide to transfer all kinds of records onto blockchain—a secure, decentralized way to register and store online payments and transactions through “smart contracts”. The assets can be bonds, real estate, stocks, etc.

However, we must be mindful of the different regulations participants must follow such as Know Your Customer, Anti Money Laundering and Accredited Investor verification, by utilizing smart contracts to check and respond to the permissions of every person who attempts to use them in a transaction. If a user who does not meet the proper compliance level attempts to buy a token, the relevant smart contract will compare their permission level against an internal database, and instantly restricts their account from completing the purchase.

For identities to be self-sovereign, they need to reside in an environment of dispersed trust, not belonging to or controlled by any single organization.

The Ohana Blockchain will be governed by the Board of Trustees. These trustees approve the policies governing selection of Validators—the trusted institutions who operate the nodes of the distributed ledger. The trustees also ratify decisions of the Technical Governance Board over the evolution of the Ohana Blockchain open source code run by each node.  Ohanae anticipates that validators will include financial institutions, governments, and other institutions in a position of public trust who wish to support a self-sovereign identity layer for the Internet.

Board of Trustees shall have the obligation to:

Ohana Trust Framework does not dictate any trust rules beyond validating that a Ohana Blockchain identity record is digitally signed by a submitter that has write permission. All decisions about trust in a Ohana Blockchain identity record depend on trust relationships between the parties reading and writing the records. Each relying party will be able to verify the issuer of a claim, such as Department of Motor Vehicles (DMV) as driving license issuer, and also that the claim has not changed since writing. Each relying party must determine if the claim issuer is one they can trust. In many cases point-to-point trust is not efficient enough; this is where the Ohana Trust Framework fits. A community of relying parties (e.g., banks, insurance companies, universities, government agencies) can define a trust framework that will define the rules for verifying a claim or credential to a certain level of assurance.

Validators are expected to make a profit running a node; however, there are other benefits:

Every validator builds a positive reputation by operating a Ohana Blockchain node that meets the security, privacy, availability, and reliability standards laid down by the Board of Trustees.

The Truth about Blockchain

According to the Harvard Business Review, we must be mindful that technology adoption takes time. Blockchain is not a “disruptive” technology, which can attack a traditional business model with a lower-cost solution and overtake incumbent firms quickly. Blockchain is a foundational technology: It has the potential to create new foundations for our economic and social systems. But while the impact will be enormous, it will take decades for blockchain to seep into our economic and social infrastructure. The process of adoption will be gradual and steady, not sudden, as waves of technological and institutional change gain momentum.